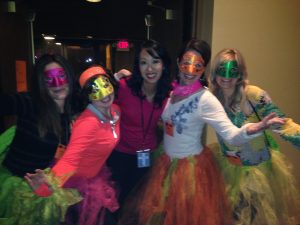 This past weekend, I had the honor of speaking at a women’s retreat in Wisconsin.  The ladies at Breakaway were amazingly open and warm hearted.  The Holy Spirit was so present.  And there was much laughter!  As I described a few things to my kiddos, my son said “That sounds like kids camp!”

Picture 700 women wearing glow stick necklaces in the darkened forum on the first night.  Picture glow fairies who flutted into the main session to bestow surprise gifts to the unsuspecting.  Picture ladies going on a glow run in the rain.  Picture neon colored beach balls flying through the air.

You know, it’s good for grown ladies to act like kids again.  Here are three things from the retreat that you may want try:

1.  Have a dancing contest with a hilarious twist.  Instead of dancing standing up, lay down.  Let me explain!  Have the dancers (maybe 2-4 people depending on your space) lay on their backs.  Put a camera above them so the camera is pointing down at them.  Make sure you can see from head to toe.  Start up the music and tell them to start dancing laying down.  Make it a contest with an award for the funniest dancer.  Use different kinds of music for maximum hilarity (techno, hip-hop, 50s, ballet, you get the picture).  When you watch this video…guaranteed laughter!  (Retreat planners:  as they danced it was shown  on the big screen and it was hilarious!)

2.  Dress up wacky.  There are two ladies called the “plaid twins” because years ago, they came to the retreat in matching plaid outfits.  Keeping up the tradition, each year they come matching to the retreat to make people smile.  At Christmas, they dress up like angels!  Here we are with their beautiful hats and I’ll tell you, they certainly made me smile.  Another wife (hi Andrea!) has a very creative husband.  In the past, when Andrea was away, he had “pirate night” where he and the kids dressed up as pirates for dinner.  They put different foods like hot dogs on plates and then when they said “Arrgghh!” they switched plates.  How  fun is that?  ARRGGHH! 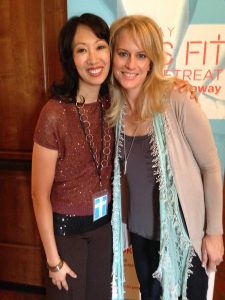 3.  Make a new friend.  There was another speaker at the event, author Jennifer Strickland.  We had never met one another or talked, yet we have books with the same publisher (Harvest House), have three kids, and happen to both be tall.  I met a Causasian woman who happens to have a lot of Chinese friends.  She said, “Let me take a picture of you to show my Chinese friends.”  I can’t say anyone has ever said that to me, so we had a big laugh and even posed doing Tai Chi together.  It was hilarious!  I made so many new friends.  Be like a kid…and make new friends.