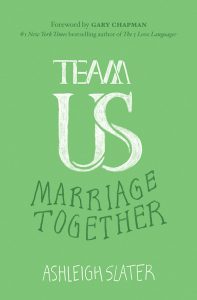 What a pleasure it is to introduce you to my friend Ashleigh Slater!  She is the author of Team Us: Marriage Together.

Not only is the foreword written by Gary Chapman, Ashleigh’s husband Ted and my husband James were good friends in graduate school (Regent University).  We’ve known each other for years.

I’m giving away a copy of Team Us away this month.  Simply leave a comment to enter by answering the question:  Do you feel like your spouse is more of a teammate or competitor?

Ashleigh was kind enough to answer some questions about her book.  Here’s more about Team Us:

Q:  The idea of marriage as a “team” is a central theme in your book. Why is it important for married couples to think of themselves as a team?

Whether it’s in sports or the office or even a show like The Amazing Race, members of a winning team are for each other. They work together in order to succeed.  And I believe that’s vital to marriage. One of the reasons Ted and I got married was because we believed God could use the joining of our lives in a unique way for His glory; that we’d be better together. That’s more likely to be our reality if we are united, determined to do what it takes to face life and its challenges side-by-side, rather than back-to-back.

Q:  In your book, Ted has the opportunity to chime in with a “Ted Says” section. Was this your idea or the publisher’s?

It was actually Ted’s idea! It came out of a brainstorming session he and I had about three or four chapters into the writing process. For those who haven’t read Team Us, it relies heavily on storytelling. These stories include tales of areas Ted has grown in over the years and continues to grow in today. For example, time management issues. I also share how he forgot my birthday our first year of marriage. I was concerned that husbands might feel like I was picking on Ted by sharing these things. That those who don’t personally know him wouldn’t understand that he

actively encourages me to divulge these details; to not be afraid to be transparent about his faults. When I shared this concern with him, his solution was to incorporate his voice into the book. Not only did it solve this issue, but it also added another layer of team to the book. I have had a lot of people comment on how much they love that his voice is heard alongside mine in a book titled, Team Us.

Q:  What’s one practical way that you recommend staying on the same team even through the hard times?
Remember that your spouse is not the enemy. It can be easy when you face difficulty to start pointing fingers and assigning blame. You know, to look for what your spouse could have or maybe even should have done differently. And, as a result, “casting” your spouse in the role of villain in the tragedy you’re facing. Instead of making it “you against me,” I think it’s important to make it “us against the problem.” Determine to face whatever comes your way together, united. And I believe this is something that doesn’t just apply to the “big” difficulties, but even the smaller challenges involved in parenting or finances.

Q:  If there’s one thing a reader pulls away from the book, what do you hope that might be?

I hope readers walk away inspired to be intentional about daily growing together as a couple, and confident that the best is yet to come.

Leave a comment to enter the giveaway for Team Us by answering this question:  Do you feel like your spouse is more of a teammate or competitor?

One winner will be chosen on August 22.  Please note we are only able to ship to the U.S. so you must have a U.S. address to win.