How to Get Started as an Author and/or Speaker 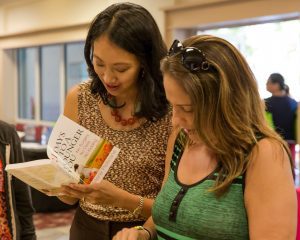 I’m often asked, “How did you get published?” or “How did you start speaking?” Many times the person is asking because she would like to do the same.

Since it’s Labor Day, I thought I would share how you can get started as an author by sharing about my journey.

When I was in junior high, I gave my first speech at graduation and I realized, “Wow, I really like this!” Whenever I had the opportunity to speak at school or youth group, I jumped on it.

Key #1:  Look for opportunity wherever you are and seize it!

I went to Biola University and earned my BA in Communication and Intercultural Studies.  I knew I wanted to serve God, but how?  Doing what?  Maybe as a missionary?

After graduation in 1992, I worked at Biola as an admissions counselor.  Here I gained a lot of experience interviewing potential students – those interviewing skills would come in handy for the future for my books.  I worked with international students and could see the Lord connecting the dots.

But working in college admissions was not a lifelong career for me.  I dreamt of being a morning talk show host like Kathie Lee Gifford – interviewing people and having fun on TV!  So I began studying for my Masters in Journalism at Regent University (where I met my husband James).  After interning at a local ABC news affliate, I knew local news was not up my alley.  But I did love interviewing people for feature stories and was thrilled to have my first job out of grad school at the 700 Club as a features producer.

I think I could have been happy there for many years, but James and I got married and after just seven months of working at my dream job, we married and moved to Dallas where his first job was.  I was a very happy newlywed.

Key #2:  Be flexible and adaptable.

My husband’s job didn’t turn out as expected, so we decided to re-locate closer to my parents in San Diego. Within 2 weeks of coming to San Diego, we both had jobs!  Since my background was in media, I sought to work at Turning Point with Dr. David Jeremiah in San Diego, but they didn’t have any job openings.  Instead I taught communication courses at San Diego Christian College.

When I got pregnant about five years later, James and I talked about me being a stay home mom.  So after Ethan was born, I quit my job at Turning Point but continued to freelance for them.  I had long held that dream to continue in my love for public speaking…and speak to women’s groups somehow.  Of course, many speakers carried books so I began wondering what I might write about.  Although my teenage aspirations had been more along the lines of speaking and hosting a TV show, my academic and life experience had given me tools as a writer.

So at a personal growth conference I attend each year with my husband, I wrote a BHAG (Big hairy audacious goal):  I would return the following year with a manuscript written.  It was an ambitious goal as a new mom but one that would keep my passions fueled.  A year later, my manuscript was done.

Key #4: Attend conferences in your area of interest.

A turning point for me was meeting author and speaker extraordinaire Pam Farrel.  She had written more than 40 books.  I waited in line after she spoke to a large group of moms.  My heart was beating wildly.  When I met her I basically said, “I love what you are doing!  I would like to do what you are doing.  Do you think you can look at my manuscript?”

To my delight and surprise, Pam said she would be happy to look at my manuscript.  I joined the mentoring group she led for aspiring writers and speakers.  She brought my manuscript to her publisher.

And the result of that connection still blows me away today.

Four books with House Publishers and one with Moody Publishers, all published between 2010-2015.

My advice to you as an aspiring speaker or author?

Keep doing the right small things over and over again (I highly suggest reading The Compound Effect by Darren Hardy).  Look for opportunities and seize them.  Build your skill set.  Attend conferences.  Keep growing and steadily working, just like the tortoise.  A book contract isn’t an overnight deal.

But it is attainable and the process to get there is a big part of the learning!  (sometimes it’s fun…)