Are You Listening to the Wrong People? (Spoiler: my voice is back!)

I’m going to start talking to my dog again!

Listening to the right people makes all the difference between a problem solved or a problem prolonged.

My voice is a case in point.

As many of you know, I have not been speaking normally since late October after being sick and losing my voice.  I feared straining my voice, so I rested it.  I went to the doctor.  I went to a speech therapist.  We tried medicines for acid reflux.  We did breathing exercises.  I was advised to talk and then rest when sore.

Nothing seemed to help much.  Each day, I spoke quietly just a little bit and found my throat terribly sore as I went to bed each night.

With no relief, I re-visited the ENT doctor in January who told me it was definitely not normal that I still wasn’t talking.  He said I had learned some bad habits that needed to be unlearned.

This made little sense to me.  What bad habits had I learned?  After all, I was doing my best to follow a healthy diet.  I cancelled speaking engagements.  I didn’t whisper (which strains the voice) nor did I yell.

In the past 2 weeks, I have had major prayer from church.  The Bible tells us to lay our hands on the sick and pray for them – and that’s what the people of God have done powerfully on my behalf.  At a Friday night prayer meeting, I cried at the altar and knew God had touched me.  As one lady prayed, what the devil means for a death blow, God will use as a launching pad! 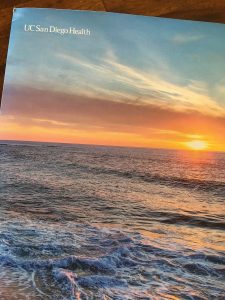 This Monday, I went to the doctor who did a stroboscopy – looking at my throat and taking pictures.  I prayed in that exam room that God would give him divine wisdom.  He saw inflammation but everything else looked fine.  He took a “shot in the dark” and prescribed a mouth rinse to fight infection in the mouth.  And he referred me to who he called “the best speech pathologist in San Diego.”

I used the rinse and amazingly, my pain has lessened.  The “shot in the dark” was working!

Just this morning, I met the speech pathologist who specializes in speech therapy for singers and speakers.  She knew right away what was wrong with me.

“You are speaking in a guarded, soft voice.  That will strain your voice for sure and make it hurt.  Can you roll your “rrrr’s” as loud as you can?  She played notes on the piano and had me sing the scales loud and strong.  As I sang, I felt new. 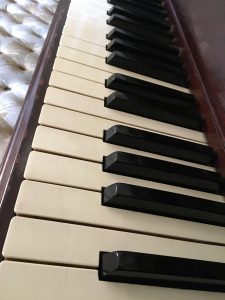 Then she had me follow her voice, speaking loudly and clearly and all of a sudden, it’s like the chains fell off.

Turns out, I was my own worst enemy.

After being sick, I re-learned how to speak softly, timidly, straining – and I was hurting myself.  It took a professional to validate that my vocal cords were “pristine” and I should not fear!  I should speak normally, loudly, and constantly.

Talk about a different approach to life than what I have been practicing these last three months!

I have to think on this pivotal day, what would have happened if I had never been referred to Erin, my speech pathologist?

I believe I would have been voiceless much longer, continuing to speak in that guarded voice, inadvertently hurting it more.

How many times are we our worst enemy?  We operate out of fear, not faith.

We learn bad habits that become the norm.  We need someone, the right someone, to come along and say, “It doesn’t have to be this way.  You’ve got to practice new habits to free yourself.”

I want to give you that hope today.  What the devil means for a death blow to you or your family can be the launching pad for the next big thing God is going to accomplish in your life.

Pray, rely on the Holy Spirit, trust, and live loud and strong!