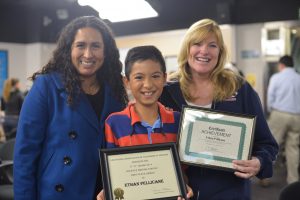 Ethan with his Spanish and English teacher – both claiming Ethan as theirs!

He entered the CATE (California Association of Teachers of English) creative writing contest at school.  The theme was Uncommon Connections.  He not only won in the San Diego category of 5/6th graders…his essay won STATE!

I was so blessed to sit in the awards ceremony and see it through the eyes of my budding writer.  I think you’ll be encouraged to know that an essay about Corrie Ten Boom can win – her story is so worth telling.  So here is Ethan’s creative writing essay (historical fiction):

I heard the Gestapo knocking on the front door of the Beje. I quickly put my stuff away, and along with a few other Jews, fled as fast as my feet would carry me upstairs into Tante Corrie’s room, and into the angel’s den. I silently thanked God for “Mr. Smit,” who had built this shelter that would save not only my life, but the lives of several more Jews as well as a resistance agent who had been lucky enough to get up here when the Gestapo go t here. I could hear Tante Corrie, whose breath was muffled because of sickness, hoping things would be all right for her. I knew who the Nazis were before the Gestapo (Nazi secret police) had stormed the house, but this connection was a very uncommon one, and one I would never forget in my life.

It was a bright, sunny day in October 1901 when I was born in Haarlem, Holland. My Jewish father and mother named me Aharon, who was the first high priest of Israel. Once I turned 10, my family and I moved to Berlin because of my father’s job as a car manufacturer. Therefore, I was a witness to the World War I , which was known to us as the “Great War.” Because of our connections with the war, our parents thought it was necessary for us to understand that war was a very gruesome thing. I knew what our parents had taught us. However, when in 1933 the Nazis rose to power, we knew that they were a grave threat to us and moved back to Haarlem. Back in Holland, we returned to a normal life. However, we did not know that our life was about to change completely.

It was May 10, 1940. It began as a normal night, with prayer, Bible reading, and then bedtime. Suddenly at midnight, my parents and I were awakened by the sound of thunder. We went downstairs and looked out the window, expecting some much-needed rain to shower over our turnips and other crops. However our assumptions were all wrong. Instead, we were met by a terrifying sight. The Germans were bombing the airport! We knew an invasion would be coming, so my father got right to it.  He frantically looked over contacts and possible shelter against the Germans. We settled at a Dutch woman’s house, otherwise known as the Beje. Corrie ten Boom and her family welcomed us anxiously but graciously. We got there just in the nick of time. The very next day, the Germans occupied Haarlem, as well as the entire country of Holland. In the Beje, it took a little time to get used to things as they were now, but, slowly but surely, we got used to our new lifestyle in hiding.

Now I sat frozen in the secret room along with all the other Jews hiding in the Beje. We could hear the Gestapo interrogating Corrie. We got extremely lucky. Our secret remained safe from the Gestapo. Another stroke of luck came when the Dutch police replaced the Gestapo as guardians of the Beje.  The police chief Rolf happened to be a friend of Corrie’s. The Dutch police were sympathetic towards our plight and rescued us. They took us to another home where we would be safe from Nazi hands. I would stay there along with the other Jews, far away from the Nazis and their concentration camps until the war ended.

Every time I hear the words “Second World War” or “Holocaust,” my mind darts back to the Angel’s Den. And to Corrie. I can remember the night when I lay still inside that secret room. Then, my mind takes me into another portal. However, this one is a portal of thanksgiving. A portal of thanks to Corrie’s family, of which two members died for my sake in the terrible conditions of a POW camp. Then my mind reminds me of what I am now: an engineer in America, a free man. These dreams would have been just that without Corrie – just dreams. Corrie ten Boom made a lifelong impact on me. After all without her, I may be just a lifeless body, buried in a concentration camp’s cemetery. But here I am. I am eternally thankful for the sacrifices made for me because of an uncommon connection with this unlikely hero. 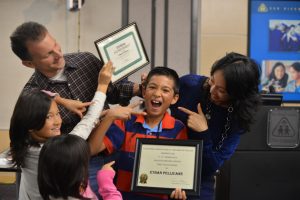