Need help with social media and your kids? SIGN UP for Arlene's monthly tip sheet.

My Kids Love Prager U Even if YouTube Doesn’t 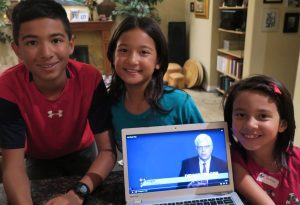 On Election Day, I had the honor of being a radio guest for Dr. Bill Maier Live on Faith Radio.  I am a big fan of family psychologist Dr. Bill Maier, and we are both big fans of conservative talk show host Dennis Prager.

As you know, my son Ethan (12) is in middle school and I’m happy to say his screen time of choice and treat is watching Prager University videos.  If you don’t know about it, PragerU presents free, short 5 minute videos on big ideas.  They teach what isn’t being taught in schools anymore.  Some of Ethan’s favorite PragerU videos are:

These videos use stick figure animation and a talking head.  They are hardly objectionable in any way to me as a parent of young children.  Yet YouTube currently lists 19 PragerU videos – over 10% of their entire collection -under “restricted mode.”  These videos do not contain adult, sexual, or objectionable content.  These videos are produced to educate people of all ages about America’s founding values.

From Ethan’s list of favorite videos, two of them are marked “restricted” – Israel: The World’s Most Moral Army and Why Did America Fight the Korean War?

Just take a look at the videos yourself and you will be stunned.  How can YouTube, a supposed platform for free speech, have the ability to censor this?  As Colonel Richard Kemp, a Commander in the British Army (Ret) says at the end of the Israel video, “I say it because it’s true.  People who care about truth should know it.”

I am saddened that truth, if it doesn’t line up with the Left, is painted as dangerous, objectionable, and it is “restricted.”  But I also believe YouTube’s attempt to stifle PragerU can backfire and make even more people watch!

In the audio segment below, you can listen to my radio interview with Dr. Bill Maier about why my kids love Prager U even if YouTube doesn’t.  You can find the show in its entirety here at Dr. Bill Maier Live.    My segment is in the 2nd hour of the November 8 program.